As I write this, I know that at some point today musical legend Whitney Houston will be laid to rest.  In the past week and 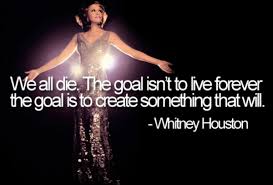 since her passing her life story has been recapped, retold and re-evaluated.  We, the public, have been given entry into aspects of her life that we weren’t privey too before and we wait with baited breathe to hear “the rest of the story”.

But this isn’t really a post about Whitney Houston.

It is a post about our time in “the dash”.

You know “the dash”, right?  It is that time between our birth and our death represented by that very small line known simply as “the dash”.   Despite the challenges of Whitney’s life in recent years, we have been reminded this week that perhaps, just perhaps, her legacy to the music industry brought about by that  tremendous gift people are now dubbing “THE voice” far outweighed the Whitney of today.  Quite frankly, I was reminded not only of how powerful a singer she had been at her peak but was also pleasantly surprised to hear of her many major contributions to the entertainment industry.  For example, I didn’t realize that Whitney was the first black woman to grace the cover of Seventeen Magazine nor did I realize that she was the first successful black artist on MTV and I had long forgotten the courage of she and Kevin Costner to explore an inter-racial relationship on the big screen.

In other words, since her passing we were reintroduced to Whitney’s “dash”.  Not the isolated snapshots over the past several years, but ALL of her dash.  The beginning, the middle and the end and we were reminded that it was, in fact, one hell of a dash.  We were reminded that the sum total of one’s life cannot be encapsulated by bad behavior, stints in rehab or even by media frenzy.

Legacy is about being the best you that you can be.  Legacy is about setting the example in your space to live the fullest possible life with joy, energy and conviction.  Legacy is about not only lifting yourself up, but those around you in the process.  Those we consider the “greats” of this world did not start out seeking fame or celebrity.  They had a voice inside them that rang so loudly that it could not be stiffled and, in the process, others heard that voice and followed it…

One of the most powerful moments for me in watching Whitney’s funeral was when Rickey Minor (former Music Director for Whitney Houston in the 80’s and 90’s and current Music Director for The Tonight Show) said simply of Whitney, “Were it not for you, I would not be me.”

What are you doing with it?

This entry was posted on Sunday, February 19th, 2012 at and is filed under Current Affairs, Inspiration, Valerie Pendergrass. You can follow any responses to this entry through the RSS 2.0 feed. Both comments and pings are currently closed.

One Response to “our time in “the dash””