While the New England Patriots may not have won the Super Bowl this past weekend,  Tom Brady certainly has a story 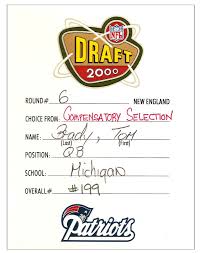 that can teach us all a thing or two about dedication, commitment and determination.

Did you know that Tom Brady was drafted #199 (yes, that is one hundred ninety-nine) in the 6th round of the 2000 NFL draft?  He was finally picked up by the Patriots and initially joined the roster as their #4 QB.

Tom Brady was dejected.  Although Brady was happy to actually get picked up, he NEVER thought he would go so low in the draft and began to wonder if he would get picked up at all.  When he first met his QB coach, he asked, “Do you know who I am?”  The coach replied, “Of course.  You’re the kid we picked up at #199.”  Brady’s response?  “I’m the best pick you ever made.”

And he set out to prove it.

Brady did not allow where he started to define his career.  In fact, it became his motivation.  He was determined to not only prove himself but to exploit any opportunities that were given to him.  Although he began his first season as the number 4 quarterback in the depth charts, he finished in the number 2 spot behind Drew Bledsoe.

He had one goal in mind:  To work hard enough and play well enough to become the starting quarterback.  During the 2001 season, he got his chance when Bledsoe got hurt.  His first few starts were rather unremarkable but he soon hit his stride and the rest, as they say, is history.

What about you?  How comfortable are you in your role in your organization?  Are you just happy to be there or are you playing to succeed?

Don’t let others perception of who you are define you.  Work hard. Play hard.  Practice hard.  Prove that you deserve a starting spot and then when you get there, continue to work just as hard to stay there and your career will take care of itself.

True to his word, the 199th draft pick of the 2000 NFL draft has turned into one of, if not the best pick the Patriots have ever made.  What about you?  Are you the best pick your company has ever made?  Does anyone know it besides you?

This entry was posted on Tuesday, February 7th, 2012 at and is filed under Career management, Coaching, Sports, Valerie Pendergrass. You can follow any responses to this entry through the RSS 2.0 feed. Both comments and pings are currently closed.