After watching the latest republican debate last evening, it occurred to me this morning to begin an anti-politics 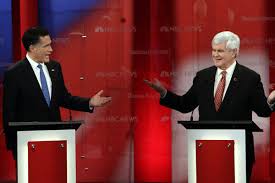 revolution.  I earnestly found myself wondering what it would take to begin a viral revolution to boycott the polls between now until November in order to create an awakening in politicians that “old school” politics are dead.

As I witnessed the political boxing match between Mitt Romney and Newt Gingrich, I was amazed at how much reality TV has now infiltrated the political arena.  We care less about the deep issues facing this country (and more importantly, how we are going to resolve them) than we do about the banal back-and-forth of grown men.  Yes, their history informs us as to their character but do we need to continue to have the same cat fights over and over when there are big issues to be addressed? The only way we are going to find politicians without “blemishes” is to lower the age of candidacy to 5; but then I guess the attacks will be about at what age one potty trained or walked or said their first word….

For a moment, I had a glimmer of hope as Governor Santorum laid the gauntlet to put aside the high school antics.  Finally – an adult speaks!  But it was a moment quickly lost as the next question once again returned the debate to a childish level.  Debates are no longer about understanding the candidates.  They are becoming an arena akin to MMA (mix martial arts) in which we seek the knock-out.

Because sadly, corporations, schools and even many churches are no different.  Leaders speak of a kindler, gentler environment without recognizing that the systems of internal competition, gossiping and the rewarding of cut throat behaviors subverts and undermines the very mission they are trying to accomplish.  These behaviors speak to the SYSTEMIC challenges that make them ok.

At the end of the day, it is an individual choice.  Do I choose to “play politics” (and doesn’t that phrase reflect everything we need to know)  or do I make a choice to honor my beliefs, my ethics, my integrity even if it means taking a hit?  Even if it means a short-term loss over a long-term gain?

Change begins with you and with me.  It begins with a simple choice to dialogue about the big issues instead of trying to crush our opponent with the next big salvo of accusation and pettiness.

It’s time for a revolution and it starts with me.  Are you in?

This entry was posted on Friday, January 27th, 2012 at and is filed under Leadership, Television, Valerie Pendergrass. You can follow any responses to this entry through the RSS 2.0 feed. Both comments and pings are currently closed.